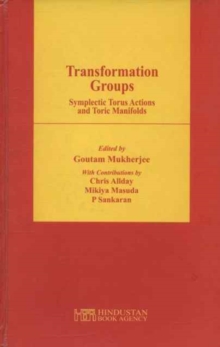 The importance of cohomology theory in the study of symplectic and Hamiltonian torus actions has been recognised for a long time.

The usefulness of cohomolgy theory in the field continues today, significantly in the theory of toric varieties.

One of the major aims of this book is to illustrate the cohomological methods used in the study of symplectic and Hamiltonian torus actions and to present some recent results.The other aspect of this book is to present the theory of toric manifolds, which is a study of toric varieties from a topological view point and to illustrate some applications to combinatorics. Most of the techniques used and proofs of results included, are either new and have not appeared elsewhere or are written in a style which may be more accessible to readers.

The volume is suitable for graduate students in mathematics having some basic knowledge in algebraic and differential topology.