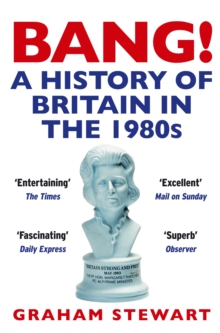 Bang! : A History of Britain in the 1980s Paperback / softback

Britain in the 1980s was a polarized nation. Determined to take the country in a radically different direction was the most dominant, commanding and controversial leader of her age, Margaret Thatcher.

With the two main political parties as far apart as at any time since the 1930s, the period was riven by violent confrontation, beginning with the explosion of rioting that rocked England's cities in 1981 and again in 1985; a year-long fight with the National Union of Mineworkers, and then with print workers in Wapping.

There was the war to retake the Falkland Islands and the re-escalation of the troubles in Northern Ireland, which began with hunger strikes and peaked with the attempt to assassinate the entire Cabinet in the Brighton bombing.

It was also a decade of political innovation - in the life and death of the Social Democratic Party, the mass privatization of state-owned industries, the sale of council houses and the deregulation of financial markets - and cultural ferment, with the rise and fall of indie pop, the emergence of house music, Channel 4 and the growth of alternative comedy; and Prince Charles's interventions on architecture. Graham Stewart's magnificent and comprehensive history of the eighties covers all these events, and many more, with exhilarating verve and detail, and also examines the legacy of a decade that sowed the seeds of modern Britain.