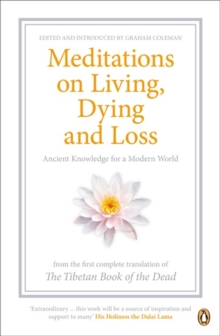 Meditations on Living, Dying and Loss : Ancient Knowledge for a Modern World from the Tibetan Book of the Dead Paperback / softback

The most graceful English translation of this masterpiece of world literature - translated and co-edited by three leading contemporary masters of this tradition, appointed by the Dalai Lama himselfWhat is death?

How can I help those who are dying? How can I prepare for my own death? And how can I come to terms with bereavement?Here is an accessible and moving introduction to The Tibetan Book of the Dead, whose visionary perspective on living, dying, and loss is one of the most inspirational and compelling in world literature. With an introductory commentary by His Holiness the Dalai Lama, Meditations on Living, Dying, and Loss is a compilation of writings from the first complete translation of The Tibetan Book of the Dead, which explores these central questions.

Each chapter is introduced by the editor of the acclaimed first translation, Graham Coleman.

Based on his experience of bereavement and his knowledge of contemporary near-death research, he reveals the immense creativity that deepening our insight into the relationship between living and dying can bring. Graham Coleman (co-editor) is President of the Orient Foundation (UK).

Thupten Jinpa (co-editor) is the senior translator to His Holiness the Dalai Lama.

Gyurme Dorje (translator) is a leading scholar of the Nyingma tradition of Tibetan Buddhism.

The introduction is written by His Holiness the Dalai Lama.