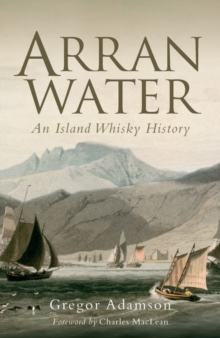 `Arran Water', the term for whisky distilled illicitly on the Isle of Arran, was revered for its quality throughout Scotland during the heydays of smuggling in the late 18th and early 19th centuries. Despite this reputation, Arran's rich distilling past has long been forgotten, cast into the shadows of more illustrious whisky-making neighbours such as Campbeltown and Islay. This pioneering book is the first to chart this fascinating aspect of the island's history. In Arran Water Gregor Adamson provides a comprehensive first-hand account of distilling on the island from the emergence of clandestine manufacture in the late 18th century to the construction of the new distillery at Lagg in 2018 by Isle of Arran Distillers which reinstated legal whisky production on the island after 160 years with the establishment of a distillery at Lochranza in 1995. Arran Water dispels the myths, hearsay and folktales that have distorted Arran's distilling story and provides a clear narrative, largely through primary research, which highlights the key role that illicit whisky production and smuggling played in the island's economic, social and cultural development. Using a vast array of original sources, Adamson outlines the manufacture, transportation, and consumption of sma' still whisky, unearths the secrets of the hidden bothies of the Arran hills and glens, and describes the bloody battles fought between island smugglers and the Excise gaugers and Revenue Cuttermen. The author also explores the development of licensed whisky production on the island, from the lost legal distilleries of the 1790s and 1820s to the modern developments at Lochranza and Lagg.