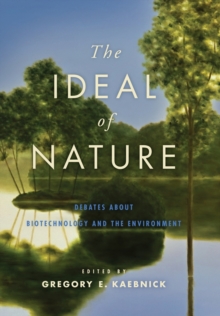 The Ideal of Nature : Debates about Biotechnology and the Environment Hardback

Going back at least to the writings of John Stuart Mill and Jean-Jacques Rousseau, people have argued for and against maintaining a state of nature.

Is there an inherent virtue in leaving alone a naturally occurring condition, or does the human species thrive when we find ways to improve our circumstances?

This volume probes whether "nature" and "the natural" are capable of guiding moral deliberations in policy making. Drawing on philosophy, religion, and political science, this book examines three questions central to debates over the idea of "nature" in human action.

Conceptually, it asks what the term means, how it should be considered, and if it is, even in part, a social construct.

From a moral perspective, the contributors question if being "natural" is itself of value or if its worth is only as a means to advance other morally acceptable ends.

Politically, essays discuss whether appeals to nature can and should affect public policy and, if so, whether they are moral trump cards or should instead be fitted alongside or weighed against other concerns.

Achieving consensus on these questions has proven elusive and seems unattainable. This should not, however, be an obstacle to moving the debate forward.

By bringing together disparate approaches to addressing these concepts, The Ideal of Nature suggests the possibility of intermediate positions that move beyond the usual full-throated defense and blanket dismissal found in much of the debate.