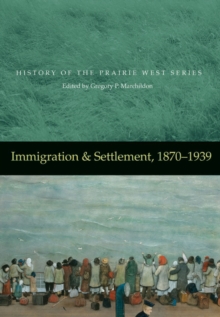 Immigration and Settlement, 1870-1939 includes twenty articles organized under the following topics: the "Opening of the Prairie West," First Nations and the Policy of Containment, Patterns of Settlement, and Ethnic Relations and Identity in the New West.

The second volume in the History of the Prairie West Series, Immigration and Settlement includes chapters on early immigration patterns including transportation routes and ethnic blocks, as well as the policy of containing First Nations on reserves.

Other chapters grapple with the various identities, preferences, and prejudices of settlers and their complex relationships with each other as well as the larger polity.