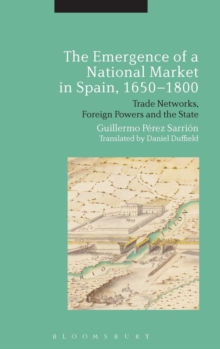 The Emergence of a National Market in Spain, 1650-1800 : Trade Networks, Foreign Powers and the State Hardback

Awarded the Jaume Vicens Vives Prize by the Spanish Association of Economic History, this study analyses the development of the Spanish domestic market from 1650 to 1800, which transformed the country from a pseudocolonial territory, politically and economically dependent on its European neighbours, to a significant European power. The Emergence of a National Market in Spain, 1650-1800 places Spain firmly in a European context, arguing that the origins of a sophisticated economy must be understood through the complex diplomacy of the period, namely the competition between Britain and France for dominance in the Iberian peninsula.

It was in response to this rivalry that the Spanish state actively promoted the conditions for economic development in the 18th century, aided by autonomous commercial networks of Catalan merchants, Navarrese tradesmen and migrant French businessmen. This original interpretation by one of Spain's leading economic historians, available in English for the first time, is indispensable reading for students and scholars of Spanish history.