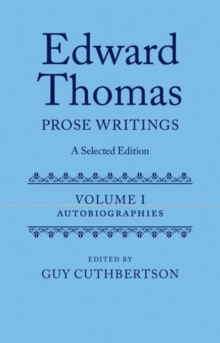 Autobiographies is the first volume in Edward Thomas: Prose Writings: A Selected Edition. It contains the autobiographical prose of one of the most respected British writers of the twentieth century, including the autobiographical story The Happy-Go-Lucky Morgans, the posthumously published 'autobiography' The Childhood of Edward Thomas, the essay 'How I Began', the previously unpublished 'Addenda to Autobiography', and a longsection from 'Fiction' (also previously unpublished). In these works, all written between 1912 and 1914, Thomas provides a remarkable portrait of his childhood and teenage years in London, Wiltshire, and Wales.

Writing this prose was a journey away from a troubled present back into earlier and happier experiences, but these uniqueautobiographies also have much in common with his other prose works. The complexity and brilliance of Thomas's autobiographical prose is discussed and revealed in a long introduction, by a detailed headnote at the start of each work, and by extensive annotation.

Thomas's prose has never previously been given the scholarly attention that it receives here.

Although Thomas's autobiographies are very accessible, and written with a longing for the simplicity of childhood, they are also intricately woven, using many quotations and allusions.

The longest of the works,The Happy-Go-Lucky Morgans, is both his simplest prose work and his most complex. Indeed, Autobiographies contains some of Thomas's finest prose, written in the two years, and in some cases merely a few months, before his decision to start writing the poetry for which he is most, and greatly,esteemed. Edward Thomas: Prose Writings: A Selected Edition will appeal to those who know and admire his prose, as well as those who have never encountered it before, and show that Thomas's prose, not least his autobiographical prose, deserves to be much better known. 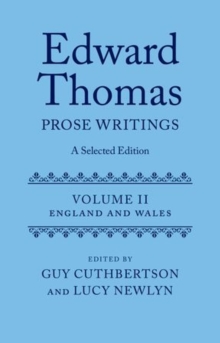 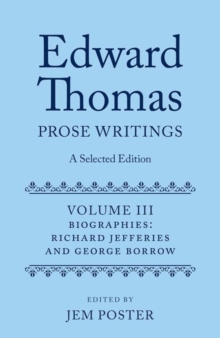 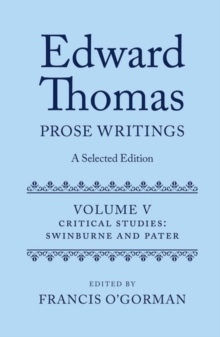