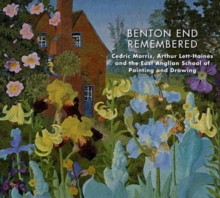 In 1940, Cedric Morris and Arthur Lett-Haines, both established artists with international reputations who had become disillusioned with the commercial aspects of the art world, moved to Benton End, overlooking the River Brett on the outskirts of Hadleigh, Suffolk.

What they found there was a somewhat ramshackle but capacious sixteenth-century farmhouse, standing in over three acres of walled gardens lost beneath brambles and elder trees; the house had not been lived in for fifteen years.

But Benton End became both their home and the new premises of the East Anglian School of Painting and Drawing which, in 1937, they had founded together in Dedham, Essex.

From 1940 until Lett Haines died in 1978 and Cedric Morris in 1982, Benton End was an exotic world apart where art, literature, good food, gardening and lively conversation combined to produce an extraordinarily stimulating environment for amateurs and professionals alike.

Ronald Blythe recalls that 'there was a whiff of garlic and wine in the air.

The atmosphere ...was robust and coarse, and exquisite and tentative all at once.

There was no formal teaching and students were left free to pursue their own enthusiasms and to show their work to Morris or Lett Haines for advice.

Without formal teaching, they were free to pursue their own enthusiasms, while Morris's skill as a plantsman and noted breeder of irises, contrasted with Lett Haines's intellectual sophistication, interest in food and wine, artistic experimentation, and a general lack of enthusiasm for the outdoors.