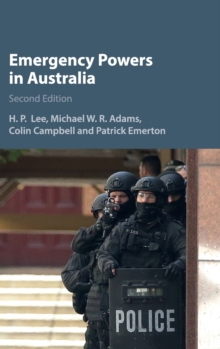 Democratic countries, such as Australia, face the dilemma of preserving public and national security without sacrificing fundamental freedoms.

In the context where the rule of law is an underlying assumption of the constitutional framework, Emergency Powers in Australia provides a succinct analysis of the sorts of emergency which have been experienced in Australia and an evaluation of the legal weapons available to the authorities to cope with these emergencies.

It analyses the scope of the defence power to determine the constitutionality of federal legislation to deal with wartime crises and the 'war' on terrorism, the extent of the executive power and its relationship to the prerogative, the deployment of the defence forces in aid of the civil power, the statutory frameworks regulating the responses to civil unrest, and natural disasters.

The role of the courts when faced with challenges to the invocation of emergency powers is explained and analysed.