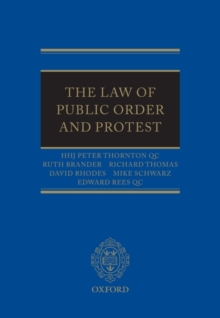 The Law of Public Order and Protest Hardback

The landscape of public order law has changed dramatically over the last decade.

A wide range of legislation - including the Serious Organised Crime and Police Act 2005 and the Anti-Terrorism, Crime and Security Act 2001 has been enacted, and established legislation on trespass, criminal damage and the use of the highway, has been put to new use in the criminalisation of protestors. The Law of Public Order and Protest provides a systematic, in-depth analysis of the law relating to public order and the right to protest.

The text provides a comprehensive guide to the area, analysing the underlying legal principles and constitutional and human rights background, as well as guiding readers through all procedural matters, the use of police powers, evidential issues, defences, and available orders (including ASBOs).

The narrative also analyses the case law in both thedomestic and European human rights context.

The comprehensive work examines all offences brought in by statute since the Public Order Act 1986 as well as the remaining common law offences.

It features offences from riot and affray, through to picketing, harassment, aggravated trespass, incitement to racial and religious hatred, and possession offences.

It is up to date with the latest legislative interventions, including the new offence of glorifying terrorism, and measures introduced under the Serious Organised Crime and Police Act2005.

This new work steers you through the maze of legislation in this complex area.