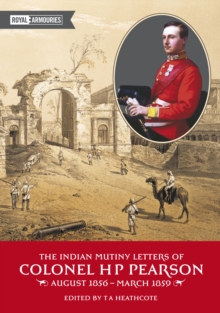 In 1858, Ensign Hugh Pearson embarked at Chatham for service with the 84th (York and Lancaster) Regiment in India, little suspecting that within a few short months he would be taking part in the dramatic events of the Indian Rebellion.

His letters to his family, published here for the first time, tell of the dramatic events that unfolded from the first rumblings of unrest at Barrackpore, to the shocking news of the massacre at Cawnpore, and the struggle to relieve Lucknow.

Pearson offers a remarkable insight into the career of a young regimental officer in Queen Victoria's army, as well as an enticing glimpse of family life.

Peace gives him the chance to engage in his favourite pastime - shooting - whilst war offers the opportunity for promotion and loot.

But as the campaign continues and his comrades begin to fall, Pearson begins to long for home.