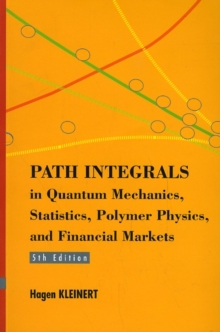 This is the fifth, expanded edition of the comprehensive textbook published in 1990 on the theory and applications of path integrals.

It is the first book to explicitly solve path integrals of a wide variety of nontrivial quantum-mechanical systems, in particular the hydrogen atom.

The solutions have been made possible by two major advances.

The first is a new euclidean path integral formula which increases the restricted range of applicability of Feynman's time-sliced formula to include singular attractive 1/r- and 1/r2-potentials.

The second is a new nonholonomic mapping principle carrying physical laws in flat spacetime to spacetimes with curvature and torsion, which leads to time-sliced path integrals that are manifestly invariant under coordinate transformations.In addition to the time-sliced definition, the author gives a perturbative, coordinate-independent definition of path integrals, which makes them invariant under coordinate transformations.

A consistent implementation of this property leads to an extension of the theory of generalized functions by defining uniquely products of distributions.The powerful Feynman-Kleinert variational approach is explained and developed systematically into a variational perturbation theory which, in contrast to ordinary perturbation theory, produces convergent results.

The convergence is uniform from weak to strong couplings, opening a way to precise evaluations of analytically unsolvable path integrals in the strong-coupling regime where they describe critical phenomena.Tunneling processes are treated in detail, with applications to the lifetimes of supercurrents, the stability of metastable thermodynamic phases, and the large-order behavior of perturbation expansions.

A variational treatment extends the range of validity to small barriers.

A corresponding extension of the large-order perturbation theory now also applies to small orders.Special attention is devoted to path integrals with topological restrictions needed to understand the statistical properties of elementary particles and the entanglement phenomena in polymer physics and biophysics.

The Chern-Simons theory of particles with fractional statistics (anyons) is introduced and applied to explain the fractional quantum Hall effect.The relevance of path integrals to financial markets is discussed, and improvements of the famous Black-Scholes formula for option prices are developed which account for the fact, recently experienced in the world markets, that large fluctuations occur much more frequently than in Gaussian distributions.