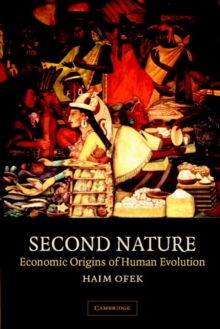 Was exchange an early agent of human evolution or is it merely an artefact of modern civilisation?

The theory of evolution by natural selection has always relied in part on progress in areas of science outside biology.

By applying economic principles at the borderlines of biology, Haim Ofek shows how some of the outstanding issues in human evolution, such as the increase in human brain size and the expansion of the environmental niche humans occupied, can be answered.

He identifies distinct economic forces at work, beginning with the transition from the feed-as-you-go strategy of primates, through hunter-gathering and the domestication of fire to the development of agriculture.

This highly readable book will inform and intrigue general readers and those in fields such as evolutionary biology and psychology, economics, and anthropology.