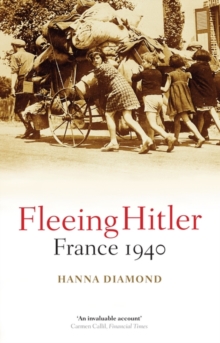 Wednesday 12th June 1940. The Times reported 'thousands upon thousands of Parisians leaving the capital by every possible means, preferring to abandon home and property rather than risk even temporary Nazi domination'.

As Hitler's victorious armies approached Paris, the French government abandoned the city and its people, leaving behind them an atmosphere of panic.

Roads heading south filled with ordinary people fleeing for their lives with whatever personal possessions they could carry, often with no particular destination in mind.

During the long, hard journey, this mass exodus of predominantly women, children, and the elderly, would face constant bombings, machine gun attacks, and even starvation.

Using eyewitness accounts, memoirs, and diaries, Hanna Diamond shows how the disruption this exodus brought to the lives of civilians and soldiers alike made it a defining experience of the war for the French people.

As traumatized populations returned home, preoccupied by the desire for safety and bewildered by the unexpected turn of events, they put their faith in Marshall Petain who was able to establish his collaborative Vichy regime largely unopposed, while the Germans consolidatedtheir occupation.

Watching events unfold on the other side of the channel, British ministers looked on with increasing horror, terrified that Britain could be next.