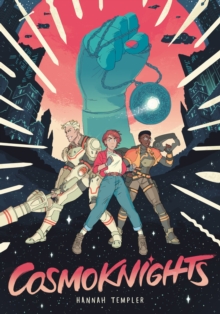 Pan's life used to be very small. Work in her dad'sbody shop, sneak out with her friend Tara to go dancing, and watch the skies forfreighter ships.

It didn't even matter that Tara was a princess... until one dayit very much did matter, and Pan had to say goodbye forever.

Years later, when acharismatic pair of offworld gladiators show up on her doorstep, she finds thatlife may not be as small as she thought.

On the run and off the galactic grid,Pan discovers the astonishing secrets of her neomedieval world... and theintoxicating possibility of burning it all down. Combines the outerspace thrills of Saga andStar Wars with the glamour and revolution of The Hunger Games Diverse cast interms of race, gender expression, sexual orientation, and disability.

Heavilyqueer/LGBT+. A cathartic feminist liberation story in a time of massive culturalfrustration at patriarchy Jawdropping artwork: slick, clean, and electricallycolorful Will be fully serialized as a free webcomic throughout 2019 to buildfan anticipation