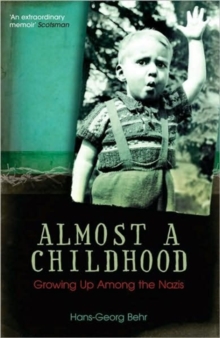 Almost A Childhood : Growing Up Among The Nazis Paperback / softback

Hans Georg-Behr's remarkable account of a childhood spent in Nazi Austria is a powerful indictment of the toll that war takes on children, whichever side they find themselves on.

To a five-year-old boy, having a high-ranking Nazi for a father means the horror of having his chin pinched by Goering, playing doctors and nurses with Goebbels' daughters, and on one occasion being taken to a grand reception to meet the Fuhrer himself.

It also means trying to come to terms with his bizarre family - his kindly, liberal grandparents whose estate provides wartime refuge for all manner of unlikely visitors; his cold-hearted mother, once a famous opera singer, now reduced to running an inn; and his older brother, who struts around in his Hitler Youth uniform, shooting squirrels and practising runic writing, convinced of imminent Nazi victory.

When that victory does not come, all the Nazi flags in the house are hastily cut up to make new Austrian ones and the swastikas are turned into shoe-cleaning rags, but Behr shows that the legacy of war is not so easily discarded.