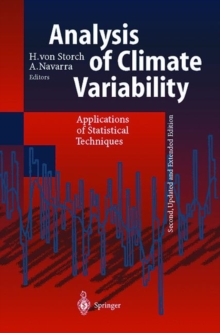 Analysis of Climate Variability : Applications of Statistical Techniques Proceedings of an Autumn School Organized by the Commission of the European Community on Elba from October 30 to November 6, 19 Hardback

This volume has grown from an Autumn School about "Analysis of Climat~ Variability - Applications of Statistical techniques" on Elba in November 1993.

We have included those lectures which referred explicitly to appli cations of statistical techniques in climate science, since we felt that general descriptions of statistical methods, both at the introductory and at advanced level, are already available.

We tried to stress the application side, discussing many examples dealing with the analysis of observed data and with the eval uation of model results (Parts I and II).

Some effort is also devoted to the treatment of various techniques of pattern analysis (Part III).

Methods like teleconnections, EOF, SSA, CCA and POP are becoming routine tools for the climate researcher and it is probably important for graduate students to be exposed to them early in their academic career in a hopefully clear and concise way.

A short subject index is included at the end of the volume to assist the reader in the search of selected topics.

Rather than attempting to reference every possible occurrence of some topic we have preferred to indicate the page where that topic is more extensively discussed.

The Autumn School was part of the training and education activities of the European Programme on Climatology and Natural Hazards (EPOCH), and is continued under the subsequent research programme (ENVIRONMENT 1990-1994).

It aimed at students in general, taking first and second year courses at the graduate level.