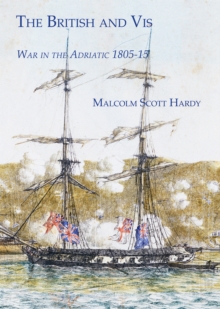 The British and Vis : War in the Adriatic 1805-15 Paperback / softback

Many years ago in the early 1970s when he was living in Zagreb, the author was intrigued by references in guidebooks to British occupation during the Napoleonic wars of the island of Vis (now modern Croatia) and the remains of British forts there.

In those days foreigners were not permitted to visit Vis because of its military importance and it is only in the last few years that it has been opened up to international tourism.

So it was in 1995 that the author made his first short visit.

The same holiday in Dalmatia included a visit to the island of Korcula where discussion with his hosts turned to the short British presence on that island and the similarity to Martello towers of the British-built tower above the town of Korcula.

Fascinated by the role of the British Navy in the region, on his return to London the author started to explore the relevant records in the Public Record Office at Kew.

The result is this study which presents an integrated approach to the political and diplomatic, naval and military, economic or local aspects of the story.

The work seeks to fit a detailed account using hitherto unpublished British original documents (which challenge or shed light on earlier judgements) into the context of French and Austrian/Croatian/Dalmatian perspectives.