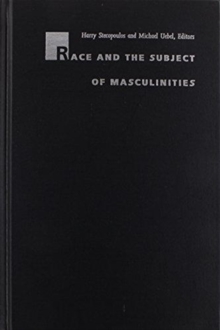 Race and the Subject of Masculinities Hardback

Although in recent years scholars have explored the cultural construction of masculinity, they have largely ignored the ways in which masculinity intersects with other categories of identity, particularly those of race and ethnicity.

The essays in Race and the Subject of Masculinities address this concern and focus on the social construction of masculinity-black, white, ethnic, gay, and straight-in terms of the often complex and dynamic relationships among these inseparable categories. Discussing a wide range of subjects including the inherent homoeroticism of martial-arts cinema, the relationship between working-class ideologies and Elvis impersonators, the emergence of a gay, black masculine aesthetic in the works of James Van der Zee and Robert Mapplethorpe, and the comedy of Richard Pryor, Race and the Subject of Masculinities provides a variety of opportunities for thinking about how race, sexuality, and "manhood" are reinforced and reconstituted in today's society.

Editors Harry Stecopoulos and Michael Uebel have gathered together essays that make clear how the formation of masculine identity is never as obvious as it might seem to be.

Examining personas as varied as Eddie Murphy, Bruce Lee, Tarzan, Malcolm X, and Andre Gide, these essays draw on feminist critique and queer theory to demonstrate how cross-identification through performance and spectatorship among men of different races and cultural backgrounds has served to redefine masculinity in contemporary culture.

By taking seriously the role of race in the making of men, Race and the Subject of Masculinities offers an important challenge to the new studies of masculinity.Contributors.