Finding such essays on specific poems can be a frustrating experience for the scholar or the student.

American and British Poetry: A Guide to the Criticism, 1925-1978 guides the researcher quickly to relevant sources of critical writing. Harriet Alexander, a reference librarian, was prompted to compile this book as a result of the many questions by students seeking information by a critic on a particular poem.

Since very often critics write about several poems in one article, the available periodical indexes and bibliographies were not specific enough as they list criticism by author, not by specific work.

In preparing this bibliography, Alexander has scanned hundreds of books and periodicals for critical discussions of poetry, indexing them under the poet's name and the title of the poem. Containing almost 20,000 bibliographic entries, this volume covers 53 years of poetry criticism.

It is especially helpful in locating recent criticism as over 13,000 entries cover articles published from 1960-1978.

The bibliography is limited to American and British poetry of 1,000 lines or less, but includes poems from the Anglo-Saxon period to the present. Although Alexander has not attempted comprehensiveness, this bibliography will lead the researcher to discover many sources not covered previously in similar publications. 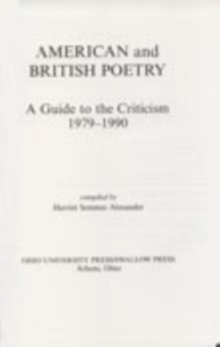