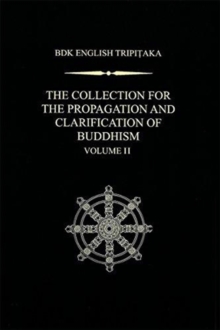 The Collection for the Propagation and Clarification of Buddhism, Volume 2 Hardback

Compiled by Vinaya Master Shi Sengyou, these writings (by laypeople as well as scholar-monastics) were intended to protect the Buddha Dharma from criticisms by Confucians and Daoists and the political powers of the time.

As noted in the Translator's Introduction, Sengyou believed that ""The Way is propagated by people, and the teaching is clarified by literature."The work is widely known as an invaluable source to examine the early development of Chinese Buddhism and how this foreign religion was accepted and adopted in Chinese society.

A notable aspect of this work is that Buddhist tenets are explained using Confucian and Daoist terminology.

While the Collection is a Buddhist work from chiefly the fourth and fifth centuries, it also serves well as a primary source for studies of contemporary Daoism.Volume 2 completes the translation with fascicles 8-14 of the source text; Volume I (available separately) comprises fascicles 1-7.