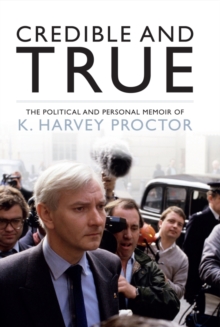 Credible and True : The Political and Personal Memoir of K. Harvey Proctor Hardback

Early in the morning of 4 March 2015, a fierce knock at the door heralded the start of a new chapter in Harvey Proctor's almost continuous relationship with the police and media, when officers from the Metropolitan Police raided his home in connection with Operation Midland, Scotland Yard's investigation into allegations of a historic Westminster paedophile ring.In Credible and True - words famously used by the police to describe the allegations of Proctor's traducer - the former Conservative MP talks frankly about his life in and out of Parliament, from the struggles and controversy surrounding his resignation in 1987 to the numerous homophobic attacks endured since - one of which, revealed here in horrific detail for the first time, was a very nearly successful attempt on his life.Finally, he speaks candidly about his most recent embroilment in Operation Midland, of being the victim of a 'homosexual witch-hunt' that has all but destroyed his reputation, adding to the topical debate about police lack of due process in the post-Savile world of 'guilty until proven innocent'.