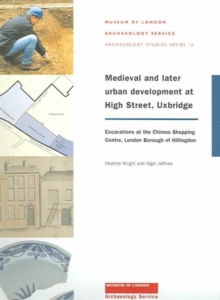 The excavations at the Chimes Shopping Centre, have given archaeologists the opportunity to trace the development of the Medieval town of Uxbridge.

The central part of the town was set out during the 12th century, perhaps as a planned extension of an existing Saxon hamlet.

The borough ditch, which marked the boundary of the town, follows the line of George Street.

Just inside this, the discovery of a pottery kiln, producing South Hertfordshire greyware shows that Uxbridge was a centre for pottery production throughout the 12th and 13th centuries. Medieval expansion south along the High Street can be identified, along with periods of prosperity and recession.

Evidence of industrial processes, particularly tanning, date from the 17th century onwards, and can be associated with denser occupation along the High Street.

By the early 19th century the entire street frontage was built up.