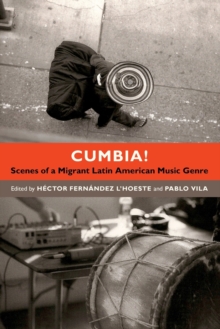 Cumbia is a musical form that originated in northern Colombia and then spread throughout Latin America and wherever Latin Americans travel and settle.

It has become one of the most popular musical genre in the Americas.

Its popularity is largely due to its stylistic flexibility.

Cumbia absorbs and mixes with the local musical styles it encounters.

Known for its appeal to workers, the music takes on different styles and meanings from place to place, and even, as the contributors to this collection show, from person to person.

Cumbia is a different music among the working classes of northern Mexico, Latin American immigrants in New York City, Andean migrants to Lima, and upper-class Colombians, who now see the music that they once disdained as a source of national prestige.

The contributors to this collection look at particular manifestations of cumbia through their disciplinary lenses of musicology, sociology, history, anthropology, linguistics, and literary criticism.