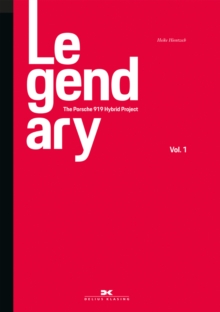 The history of the Porsche 919 Hybrid. Summer 2011 - The Porsche Executive Board decides to return to the Endurance World Championship with a Class-1-prototype.

The last overall victory at the 24 Hours of Le Mans dates back to 1998 - and its radiance fades.

From 2014, the success of the brand shall be fought for on the legendary racetrack.

A new technical regulation is the decisive factor: it provides for highly efficient hybrid racing cars.

On a white sheet of paper, a racing car is created like a spaceship. In 2017, the Porsche 919 Hybrid will have three overall victories at Le Mans and six world championship titles for manufacturers and drivers.

More is not possible. Legendary is the story of courageous inventors, world-class racers and the creation of a top team.

This book not only looks back on successes, it also deals with setbacks and dramas.

Author Heike Hientzsch herself was part of the LMP1 team.

Profound and pointed, she takes the reader into the pits and behind the scenes of the Porsche racing department in Weissach.

Always in dialogue with racing drivers likes Mark Webber or Timo Bernhard, developers and racing engineers. The fact that the 919 Hybrid will now be housed in the Porsche Museum allows the publication of this work, which has been researched in depth.