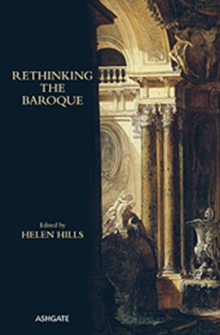 Rethinking the Baroque explores a tension. In recent years the idea of 'baroque' or 'the baroque' has been seized upon by scholars from a range of disciplines and the term 'baroque' has consequently been much in evidence in writings on contemporary culture, especially architecture and entertainment.

Most of the scholars concerned have little knowledge of the art, literature, and history of the period usually associated with the baroque.

A gulf has arisen. On the one hand, there are scholars who are deeply immersed in historical period, who shy away from abstraction, and who have remained often oblivious to the convulsions surrounding the term 'baroque'; on the other, there are theorists and scholars of contemporary theory who have largely ignored baroque art and architecture.

This book explores what happens when these worlds mesh.

In this book, scholars from a range of disciplines retrieve the term 'baroque' from the margins of art history where it has been sidelined as 'anachronistic', to reconsider the usefulness of the term 'baroque', while avoiding simply rehearsing familiar policing of periodization, stylistic boundaries, categories or essence. 'Baroque' emerges as a vital and productive way to rethink problems in art history, visual culture and architectural theory.

Rather than attempting to provide a survey of baroque as a chronological or geographical conception, the essays here attempt critical re-engagement with the term 'baroque' - its promise, its limits, and its overlooked potential - in relation to the visual arts.

Thus the book is posited on the idea that tension is not only inevitable, but even desirable, since it not only encapsulates intellectual divergence (which is always as useful as much as it is feared), but helps to push scholars (and therefore readers) outside their usual runnels.