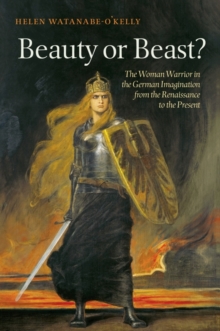 Beauty or Beast? : The Woman Warrior in the German Imagination from the Renaissance to the Present Hardback

A regiment of women warriors strides across the battlefield of German culture - on the stage, in the opera house, on the page, and in paintings and prints.

These warriors are re-imaginings by men of figures such as the Amazons, the Valkyries, and the biblical killer Judith.

They are transgressive and therefore frightening figures who leave their proper female sphere and have to be made safe by being killed, deflowered, or both. This has produced some compellingworks of Western culture - Cranach's and Klimt's paintings of Judith, Schiller's Joan of Arc, Hebbel's Judith, Wagner's Brunnhilde, Fritz Lang's Brunhild.

Nowadays, representations of the woman warrior are used as a way of thinking about the woman terrorist.

Women writers only engage with theseimaginings at the end of the 19th century, but from the late 18th century on they begin to imagine fictional cross-dressers going to war in a realistic setting and thus think the unthinkable.

What are the roots of these imaginings? And how are they related to Freud's ideas about women's sexuality?