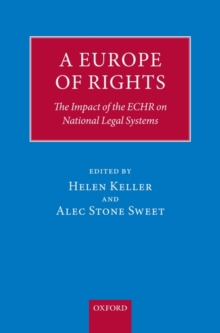 A Europe of Rights : The Impact of the ECHR on National Legal Systems Hardback

The European Convention on Human Rights has evolved into a sophisticated legal system, whose formal reach into the domestic law and politics of the Contracting States is limited only by the ever-widening scope of the Convention itself, as determined by a transnational court. In this book, a team of distinguished scholars trace and evaluate, comparatively, the impact of the ECHR and the European Court of Human Rights on law and politics in eighteen national systems:Ireland-UK; France-Germany, Italy-Spain, Belgium-Netherlands, Norway-Sweden, Greece-Turkey, Russia-Ukraine, Poland-Slovakia, and Austria-Switzerland. Although the Court's jurisprudence has provoked significant structural, procedural, and policy innovation in every State examined, its impact varieswidely across States and legal domains. The book charts this variation and seeks to explain it. Across Europe, national officials - in governments, legislatures, and judiciaries - have chosen to incorporate the ECHR into domestic law, and they have developed a host of mechanisms designed to adapt the national legal system to the ECHR as it evolves. But how and why State actors have done so varies in important ways, and these differences heavily determine the relative status and effectivenessof Convention rights in national systems. Although problems persist, the book shows that national officials are, gradually but inexorably, being socialized into a Europe of rights, a unique transnational legal space now developing its own logics of political and juridical legitimacy.