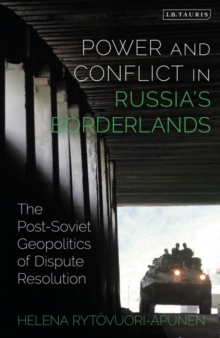 Power and Conflict in Russia's Borderlands : The Post-Soviet Geopolitics of Dispute Resolution Hardback

As Cold War battle lines are seemingly re-drawn, Russia's various 'frozen' war zones (ongoing separatist conflicts) are often cited as particularly volatile and assumed by some Western commentators and policymakers to be 'next' on Putin's 'wish list'. But, as Helena Rytoevuori-Apunen demonstrates here, this is a gross (and dangerous) oversimplification that will only serve to fuel the vicious circle of reciprocal military escalation.

Drawing on a range of empirical research and across separatist conflicts in Georgia (South Ossetia and Abkhazia), Moldova (Transnistria and Gagauzia) and Azerbaijan (Nagorno-Karabakh) and the 2014 annexation of Crimea from Ukraine, her timely book provides a balanced assessment and critique of the assumptions and misunderstandings that inform mainstream discussions, as well as placing the conflicts in their proper and complex historical contexts.

At a time when there is an increasing tendency to view Russia as the source of all instability in Eastern Europe, Power and Conflict in Russia's Borderlands is essential reading for anyone interested in the geopolitics of post-Soviet Russia, as well as policymakers and practitioners of peace/conflict resolution studies.