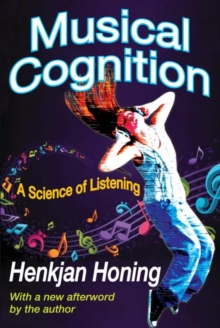 Why do people attach importance to the wordless language we call music?

Musical Cognition suggests that music is a game. In music, our cognitive functions such as perception, memory, attention, and expectation are challenged; yet, as listeners, we often do not realize that the listener plays an active role in reaching the awareness that makes music so exhilarating, soothing, and inspiring.

In reality, the author contends, listening does not happen in the outer world of audible sound, but in the inner world of our minds and brains. Recent research in the areas of psychology and neuro-cognition allows Henkjan Honing to be explicit in a way that many of his predecessors could not.

His lucid, evocative writing style guides the reader through what is known about listening to music while avoiding jargon and technical diagrams.

With clear examples, the book concentrates on underappreciated musical skills-"sense of rhythm" and "relative pitch"-skills that make people musical creatures.

Research on how living creatures respond to music supports the conviction that all humans have a unique, instinctive attraction to music.

Everyone is musical. Musical Cognition includes a selection of intriguing examples from recent literature exploring the role that an implicit or explicit knowledge of music plays when one listens to it.

The scope of the topics discussed ranges from the ability of newborns to perceive a beat, to the unexpected musical expertise of ordinary listeners.

The evidence shows that music is second nature to most human beings-biologically and socially.

This paperback edition contains a new afterword that details cutting-edge research on musicality and language.