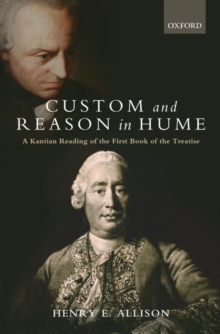 Custom and Reason in Hume : A Kantian Reading of the First Book of the Treatise Hardback

Henry Allison examines the central tenets of Hume's epistemology and cognitive psychology, as contained in the Treatise of Human Nature.

Allison takes a distinctive two-level approach. On the one hand, he considers Hume's thought in its own terms and historical context.

So considered, Hume is viewed as a naturalist, whose project in the first three parts of the first book of the Treatise is to provide an account of the operation of theunderstanding in which reason is subordinated to custom and other non-rational propensities.

Scepticism arises in the fourth part as a form of metascepticism, directed not against first-order beliefs, but against philosophical attempts to ground these beliefs in the "space of reasons." On the other hand, Allison provides acritique of these tenets from a Kantian perspective.

This involves a comparison of the two thinkers on a range of issues, including space and time, causation, existence, induction, and the self.

In each case, the issue is seen to turn on a contrast between their underlying models of cognition.

Hume is committed to a version of the perceptual model, according to which the paradigm of knowledge is a seeing with the "mind's eye" of the relation between mental contents.

By contrast, Kant appeals toa discursive model in which the fundamental cognitive act is judgment, understood as the application of concepts to sensory data, Whereas regarded from the first point of view, Hume's account is deemed a major philosophical achievement, seen from the second it suffers from a failure to develop anadequate account of concepts and judgment.