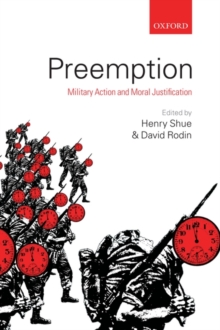 Edited by Henry (Senior Research Fellow at the Centre for International Studies, Oxford) Shue, David (Research Fellow in Philosophy at the Oxford Leverhulme Programme on the Changing Chara Rodin

The dramatic declaration by U.S. President George W. Bush that, in light of the attacks on 9/11, the United States would henceforth be engaging in "preemption" against such enemies as terrorists armed with weapons of mass destruction forced a wide-open debate about justifiable uses of military force.

Opponents saw the declaration as a direct challenge to the consensus, which has formed since the ratification of the Charter of the United Nations, that armed force maybe used only in defense.

Supporters responded that in an age of terrorism defense could only mean "preemption." This volume of all-new chapters provides the historical, legal, political, and philosophical perspective necessary to intelligent participation in the on-going debate, which is likely tolast long beyond the war in Iraq.

Thorough defenses and critiques of the Bush doctrine are provided by the most authoritative writers on the subject from both sides of the Atlantic. Is a nation ever justified in attacking before it has been attacked?

If so, under precisely what conditions? Does the possibility of terrorists with weapons of mass destruction force us to change our traditional views about what counts as defense?

This book provides the most comprehensive assessment to date of thejustifiability of preemptive or preventive military action.

Its engaging debate, accompanied by an analytic Introduction, focuses probing criticism against the most persuasive proponents of preemptive attack or preventive war, who then respond to these challenges and modify or extend theirjustifications. Authors of recent pivotal analyses, including historian Marc Trachtenberg, international relations professor Neta Crawford, law professor David Luban, and political philosopher Allen Buchanan, are confronted by other authoritative writers on the nature and justification of war more broadly, including historian Hew Strachan, international normative theorist Henry Shue, and philosophers David Rodin, Walter Sinnott-Armstrong, and Suzanne Uniacke.

The resulting lively andmany-sided exchanges shed historical, legal, political, and philosophical light on a key policy question of our time.

Going beyond the simple dichotomies of popular discussion the authors reflect on the nature of all warfare, the arguments for and against it, and the possibilities for the moral to constrainthe military and the political in the face of grave threat. This book is a project of the Oxford Leverhulme Programme on the Changing Character of War.