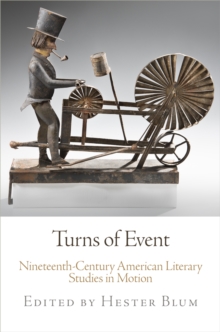 American literary studies has undergone a series of field redefinitions over the past two decades that have been consistently described as "turns," whether transnational, hemispheric, postnational, spatial, temporal, postsecular, aesthetic, or affective.

In Turns of Event, Hester Blum and a splendid roster of contributors explore the conditions that have produced such movements.

Offering an overview of the state of the study of nineteenth-century American literature, Blum contends that the field's propensity to turn, to reinvent itself constantly without dissolution, is one of its greatest strengths. The essays in the volume's first half, "Provocations," trace the theoretical and methodological development and institutional emergence of certain turns, as well as providing calls to arms.

The geopolitically oriented turns toward the transnational, hemispheric, and oceanic (whether Atlantic, Caribbean, Pacific, or archipelagic in focus) have held a certain prevalence in American studies in recent years, and the second half of this volume presents a series of scholarly essays that exemplify these subfields. Taken together, these essays survey the field of American literary studies as it moves beyond new historicism as its primary methodology and evolves in light of ideological, conceptual, and material considerations.