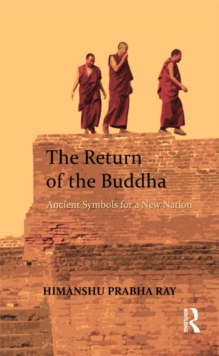 The Return of the Buddha : Ancient Symbols for a New Nation Hardback

The Return of the Buddha traces the development of Buddhist archaeology in colonial India, examines its impact on the reconstruction of India's Buddhist past, and the making of a public and academic discourse around these archaeological discoveries.

The book discusses the role of the state and modern Buddhist institutions in the reconstitution of national heritage through promulgation of laws for the protection of Buddhist monuments, acquiring of land around the sites, restoration of edifices, and organization of the display and dissemination of relics.

It also highlights the engagement of prominent Indian figures, such as Nehru, Gandhi, Ambedkar, and Tagore, with Buddhist themes in their writings.

Stressing upon the lasting legacy of Buddhism in independent India, the author explores the use of Buddhist symbols and imagery in nation-building and the making of the constitution, as also the recent efforts to resurrect Buddhist centers of learning such as Nalanda.