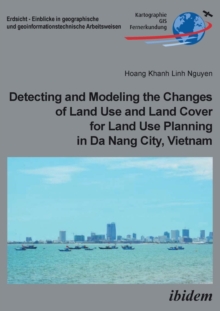 Detecting and Modeling the Changes of Land Use and Land Cover for Land Use Planning in Da Nang City, Vietnam Paperback / softback

"Da Nang City, located in the South Central Coast region of Vietnam, has developed in many aspects in the last two decades and has been known as one of the five independent municipalities of Vietnam.

Today, it constitutes the Key Economic Zone in Central Vietnam.

Rapid industrialization and urbanization have caused incessant change of land use and land cover (LULC) in Da Nang City.

Linh Nguyen's study aims at detecting, quantifying, and characterizing the changes of LULC in the Da Nang City region by using multitemporal satellite images from 1979 to 2009; it further explores the effects of LULC changes on landscape structure through spatial landscape metrics.

In a simulation it also shows the changes of LULC under different scenarios, utilizing the model of system dynamics and the model of dynamic conversion of land use and its effects.

The results show that 37% of the total land has undergone change.

Before being separated from Quang Nam Province (19791996), the LULC in Da Nang City changed gradually.

However, after becoming an independent municipality, the LULC changed with accelerated speed, especially in the urban areas.

The study suggests this is caused by a strong focus on economic development.

Conversely, agriculture and forests had a high rate of change.

The dynamic change of landscape indices reveal that agricultural areas were broken into smaller patches.

However, except agriculture, patches of forestry and urban spaces tended to have a uniform landscape configuration.

To simulate the future changes of LULC at Da Nang City from 2009 to 2030, three scenarios with different missions were developed, namely, Development as Usual, Aggressive Development, and Optimal Development.

All scenarios result in a continuous increase in urban area and a gradual decrease in agriculture, barren, and shrub areas during the simulated period.