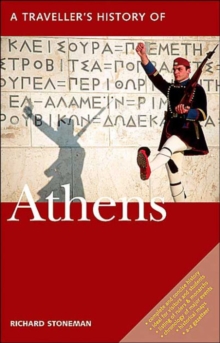 Part of the Traveller's History of Athens series

Athens has a history stretching back to Mycenaean times and in the fifth century BC it became the most significant community for the development of political thought and practice, art and culture that had ever been seen and which still retains a vital influence on the present day.

When the Ancient Olympics were first revived at the end of the nineteenth century they took place in Athens-an occasion which will surely be remembered in the Games of 2004. "A Traveller's History of Athens describes the whole history of this great city from mythological and prehistoric times, through its artistic flowering in the classical age; its transformation in Roman times from a major player in world politics to a quiet university city; its decline into ruin and insignificance in the Middle Ages when it became the playground of Crusaders and their successors; the long period of subjection to the Ottoman empire; its recreation as the capital of a new nation in the nineteenth century; its troubled history in the twentieth century and its continuing place in the hearts and minds of all visitors.

The author also includes helpful information on Athens' museums and galleries and archaeological sites, excursions from the city, as well as transportation and communications.