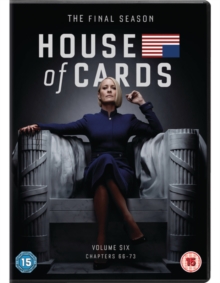 All eight episodes from the sixth and final season of the award-winning political drama starring Robin Wright.

Based on the novel by Michael Dobbs and the subsequent BBC adaptation of the book, the show follows President Claire Underwood (Wright) as she marks 100 days of office after taking over from her late husband Frank.