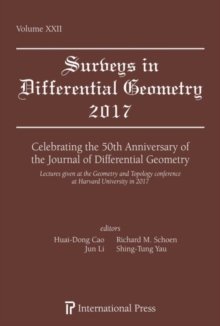 Celebrating the 50th Anniversary of the Journal of Differential Geometry : Lectures given at the Geometry and Topology Conference at Harvard University in 2017 Hardback

Part of the Surveys in Differential Geometry series

In 1967, C.-C. Hsiung at Lehigh University had the vision to form the Journal of Differential Geometry (JDG) - a journal dedicated to geometry alone.

On the journal's fiftieth anniversary in 2017, a distinguished group of geometers gathered to present their papers at the annual JDG geometry and topology conference at Harvard University. This volume presents several of those papers, which include: Denis Auroux on speculations on homological mirror symmetry for hypersurfaces in Cn; Frances Kirwan on variation of non-reductive geometric invariant theory; Camillo De Lellis on the Onsager theorem; Simon Donaldson's remarks on G2-manifolds with boundary; Daniel Freed on equivariant Chern-Weil forms and determinant lines; Kenji Fukaya on construction of Kuranishi structures on the moduli spaces of pseudo-holomorphic disks; Larry Guth on recent progress in quantitative topology; Blain Lawson on Lagrangian potential theory and a Lagrangian equation of Monge-Ampere type; Alena Pirutka on intersections of three-quadrics in P7; Bong Lian on period integrals and tautological systems; Yujiro Kawamata on birational geometry and derived categories; Fernando C.

Marques on the space of cycles, a Weyl law for minimal hypersurfaces, and Morse index estimates; Duong Phong on new curvature flows in complex geometry; and Steve Zelditch on local and global analysis of nodal sets.