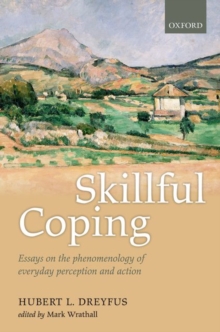 Skillful Coping : Essays on the phenomenology of everyday perception and action Hardback

Edited by Mark A. (University of California, Riverside) Wrathall

For fifty years Hubert Dreyfus has addressed an astonishing range of issues in the fields of phenomenology, existentialism, cognitive science, and the philosophical study of mind.

Dreyfus has inspired a whole generation of philosophers as he has creatively drawn on and clearly articulated the seminal works of thinkers like Kierkegaard, Husserl, Heidegger, Merleau-Ponty and Foucault.

This volume presents a selection of Dreyfus's most influential essays on mind andaction. The book begins with a model of skillful engaged human action, which informs much of Dreyfus's philosophy, and was developed in collaboration with Stuart Dreyfus.

The volume then presents articles developing a critique of the representational model of the mind in analytical philosophy of mind and mainstream cognitive science.

Dreyfus argues that representational models of mind offer an impoverished and distorting account of human engagement with the world.

The chapters show this by addressingissues in philosophy of mind and the cognitive sciences through the skill model.