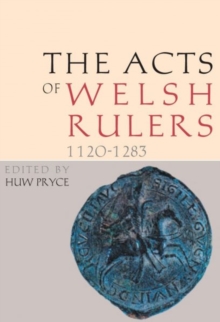 This volume provides the first comprehensive collection of charters, letters and other written acts issued by native rulers of Wales from the early twelfth century to the Edwardian conquest of 1282-3.

It thereby makes more accessible than ever before a key body of source material for the study of medieval Wales during 'the age of the princes' - an era of struggles for power by native rulers both among themselves and with Marcher lords and the English crown.

The documents assembled and analysed here illuminate a wide range of topics including political developments and concepts of authority in Wales, Anglo-Welsh relations, contacts with kings of France and the papacy, benefactions to religious houses, dispute settlement and uses of the written word in Welsh society.