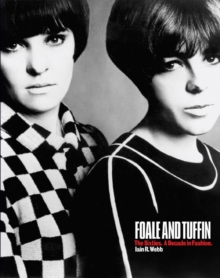 Foale and Tuffin: the Sixties. a Decade in Fashion Paperback / softback

The narrative of the Foale and Tuffin story perfectly traces the decade from its groovy, optimistic beginnings, when the two embryonic fashion designers blithely set up shop in 1961, to its crash-and-burn finale, as Sixties sanguinity melted away into a hangover of Seventies cynicism, masked as it was with the distraction of fancy-dress escapism.

Marion Foale and Sally Tuffin were two bolshy girls who just did it.

After meeting at Walthamstow Art School in 1955 and then studying together at the Royal College of Art, they embarked on a trailblazing career in fashion.

Quirky, youthful creativity, acute sensitivity to the latest moods and trends, expert craftsmanship, and a little Swinging Sixties good fortune placed them at the hub of the cultural explosion in London that defined the era.

Their boutique off Carnaby Street was at the epicenter of the new fashion scene.

Suddenly, David Bailey was photographing their outfits for Vogue, Cathy MacGowan was wearing them on Ready, Steady, Go!, and the girls were jetting around America as part of the ground-breaking Youthquake tour. Through detailed interviews with Foale and Tuffin themselves, exclusive access to their personal archives, and contributions from an extraordinary array of figures from the fashion, art and cultural scenes of the 1960s, 70s and beyond, Iain R.

Webb builds a fascinating picture of the time, throwing new light on how fashion and business underwent a period of unprecedented change.

It was a period of cross-pollination in art, music and fashion, of entrepreneurial and cultural innovation.