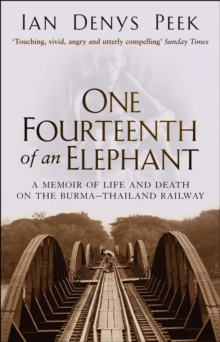 One Fourteenth Of An Elephant Paperback / softback

In February 1942, Singapore fell to the Japanese. Denys Peek and his brother were just two of tens of thousands of British and Commonwealth soldiers and citizens taken prisoner.

Eight months later, he and his comrades were packed into steel goods wagons and transported by rail to Siam.

They were to become part of the slave labour force destined for the massive construction project that would later become infamous as the Burma Thailand Railway.

He would spend the next three years in over fifteen different work and 'hospital' camps on the railway, stubbornly refusing to give in and die in a place where over 20,000 prisoners of war and uncounted slave labourers met their deaths. Narrated in the present tense and written with clarity, passion and a remarkable eye for detail, Denys Peek has vividly recreated not just the hardships and horrors of the railway and the daily struggle for survival but also the comradeship, spirit and humour of the men who worked on it.

It stands as a haunting, evocative and deeply moving testimony to the suffering of those who lived and died there - a salutary reminder of man's potential for inhumanity to his fellow man.