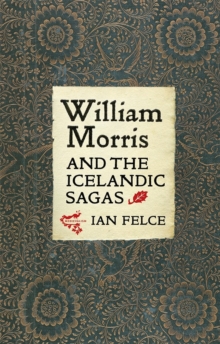 The work of William Morris (1834-1896) was hugely influenced by the medieval sagas and poetry of Iceland; in particular, they inspired his long poems "The Lovers of Gudrun" and Sigurd the Volsung.

Between 1868 and 1876, Morris not only translated several major sagas into English for the first time with his collaborator the Icelander Eirikur Magnusson (1833-1913) but he also travelled on horseback twice across the Icelandic interior, journeys which led him through the best known of the saga sites. By looking closely at his translations of the sagas and the texts on which he based them, the journals of his travels in Iceland, and his saga-inspired long poems and lyric poetry, this book shows how Morris conceived a unique ideal of heroism through engaging with Icelandic literature.

It shows the sagas and poetry of Iceland as crucial in shaping his view of the best life a man could live and spurring him on in the subsequent passions on which much of his legacy rests. IAN FELCE gained his PhD from Cambridge University.