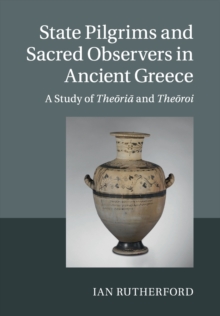 State Pilgrims and Sacred Observers in Ancient Greece : A Study of Theoria and Theoroi Paperback / softback

by Ian (University of Reading) Rutherford

For at least a thousand years Greek cities took part in religious activities outside their territory by sending sacred delegates to represent them.

The delegates are usually called theoroi, literally 'observers', and a delegation made up of theoroi, or the action of taking part in one, is called theoria.

This is the first comprehensive study of theoroi and theoria.

It examines a number of key functions of theoroi and explains who served in this role and what their activities are likely to have been, both on the journey and at the sanctuary.

Other chapters discuss the diplomatic functions of theoroi, and what their activities tell us about the origins of the notion of Greek identity and about religious networks.

Chapters are also devoted to the reception of the notion of theoria in Greek philosophy and literature.

The book will be essential for all scholars and advanced students of ancient religion.