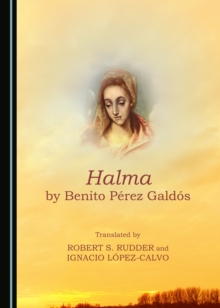 Galdos's early writings were inspired by the French writer Emile Zola, a practitioner of the literary school of Naturalism. This interest then turned to a type of spiritual naturalism under the influence of Russian writers, including Tolstoy, Dostoevsky, and Turgenev, whom he called his "great teacher." One of his most important works during this period was the novel, Nazarin, a kind of retelling of the life of Christ, in which the main character, a disgraced priest, wanders about the countryside with two female companions, attempting to follow the teachings of the Bible to the letter. He is taken for either a saint or a mad man, and at the end is shut up in an institution.

The publication of Nazarin was followed by its sequel, Halma, only six months later. In this novel, the protagonist, an aristocratic lady named Halma, after suffering great hardships, decides to use her inheritance to found an idyllic Christian society, harboring the needy and the sick. Two of its citizens will be the priest, Nazarin, and one of his two women followers; another will be Halma's ne'er-do-well male cousin, Urrea. Her family and their friends express admiration for her high ideals, but they also believe she may be just as mad as the priest, and work to defeat her. A fortunate denouement comes only after the unforeseen intervention of the supposedly "mad" priest.