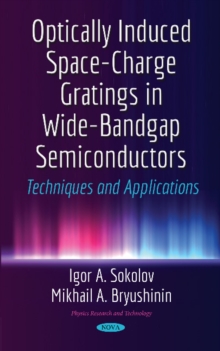 by Igor A. Sokolov, Mikhail A. Bryushinin

The photorefractive effect is one of the highest-sensitivity non-linear optical effects.

The rate of progress in the development of photorefractive applications has been limited by the rate in which breakthroughs in materials science have supplied better wide-bandgap semiconductor materials.

The last few years have seen an upsurge of interest in characterisation of new wide-bandgap semiconductor materials.

Holographic recording in wide-bandgap photorefractive materials is of particular interest from the scientific and practical point of view.

Such a recording includes the stage of space charge formation, which is associated with the spatial redistribution of photoinduced carriers.

A number of new methods studying the dynamics of space charge and photoconductivity in wide-bandgap semiconductors were proposed during recent years. This book deals with the so-called non-steady-state photo-EMF effect and its applications for material characterization and adaptive interferometry.

The first part of the book discusses the theory of the non-steady-state photo-EMF effect.

The second part of the book describes the application of the non-steady-state photo-EMF effect for the investigation of wide- bandgap semiconductors and nanostructured materials, including photorefractive sillenites grown in the air and argon atmosphere, molecular crystal SnS2, boron nitride crystals, nano-sized GaN and Se within porous matrices, SiC, AlN and Ga2O3 crystals.

The third part of the book presents a theoretical analysis and experimental investigation of the non-steady-state photoelectromotive force and two-wave mixing in photorefractive crystals under frequency-modulated illumination.

The final part of the book describes adaptive interferometers using the effect of the non-steady-state photo-EMF.

This book has been written to be accessible to specialists working in solid state physics, semiconductor physics and adaptive inter-ferometry, laser-based ultrasound.

References to over 200 original papers represent the personal selections of the authors, who are grateful to all of their colleagues for their assistance and contributions.

The authors acknowledge the financial support from the Russian Science Foundation (grant 15-12-00027).