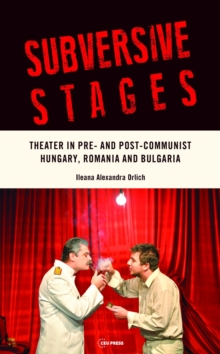 Exploring theater practices in communist and post-communist Hungary, Romania and Bulgaria, this book analyzes intertextuality or "inter-theatricality" as a political strategy, designed to criticize contemporary political conditions while at the same time trying to circumvent censorship.

In the Soviet bloc the theater of the absurd, experimentation, irony, and intertextual distancing (estrangement) were much more than mere aesthetic language games, but were planned political strategies that used indirection to say what could not be said directly.

Plays by Romanian, Hungarian and Bulgarian dramatists are examined, who are "retrofitting" the past by adapting the political crimes and horrifying tactics of totalitarianism to the classical theatre (with Shakespeare a favorite) to reveal the region's traumatic history.

By the sustained analysis of the aesthetic devices used as political tools, Orlich makes a very strong case for the continued relevance of the theater as one of the subtlest media in the public sphere.

She embeds her close readings in a thorough historical analysis and displays a profound knowledge of the political role of theater history.