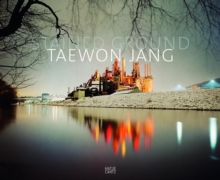 Ominous, overwhelming, and harshly lit at night-Korean photographer Taewon Jang (1976 in Seoul) puts industrial plants at the center of his work.

Residential buildings seem tiny in comparison, and the overall scale has obviously shifted.

Jang prefers to show us these industrial landscapes in the gray of the dawn, or the red of dusk, by moonlight, in fog or snow; sometimes he shifts a gnarled tree into the foreground, but despite-or perhaps precisely because of-these potentially romantic, idyllic topoi, the viewer senses an uncanny, apocalyptic mood.

Large, apparently deserted industrial plants dominate the horizon, yet moving backhoes, cranes, and conveyor belts give the impression they might have a hazardous life of their own.