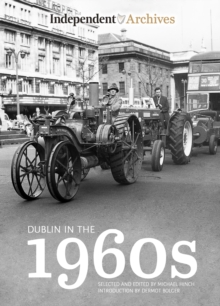 Dublin in the 1960s Hardback

This is a marvellous collection of over 250 photographs from the Independent Newspapers Ireland/National Library of Ireland collection and provides a fascinating glimpse of life in our nation's capital as it began to develop into a modern European city. In addition it details some of the most colourful visitors of the decade: American presidents Eisenhower and Kennedy, celebrities including Audrey Hepburn, Charlie Chaplin and The Beatles as they performed in the Adelphi Cinema in 1963. It also features the local people, a Moore Street trader, an old couple celebrating their 50th anniversary and the aftermath of the 1962 storm when 7 feet of snow fell overnight.

The dramatic events of the period range from the blowing up of Nelsons Pillar to the last performance in the Theatre Royal.

This is a collection of unique pictures, some of which have never been published before and will make an ideal gift.